10 Lessons in Table Manners We Learned at the Movies 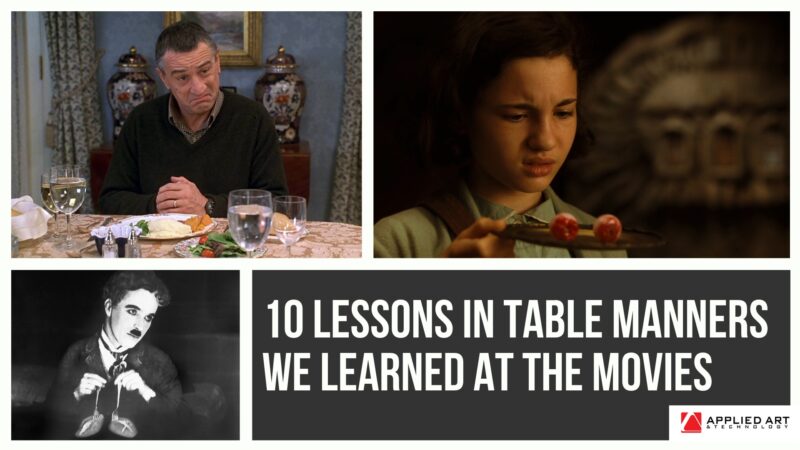 Happy Turkey Day, everyone! It’s that special time of year — the time when it’s socially acceptable to gorge yourself around the dinner table and engage in a yelling match with your family members over the last slice of pumpkin pie.

But guess what? It doesn’t have to be that way.

No, Thanksgiving really can be a time of family harmony. All you need to do is follow a few key rules on how to behave when the gravy boat comes sailing in front of your plate.

As digital storytellers, we at Applied Art & Technology have turned to some of our favorite dinner scenes in film history for inspiration. Below you will see the fruits of our labor: 10 of the greatest lessons in table manners and meal preparation as seen in the movies, listed in chronological order.

Oh, and don’t worry. You can give thanks to us later.

It’s Okay to Play with Your Food

Forget what your mother told you. Playing with your food is, in fact, an acceptable form of dining etiquette, especially when it’s done to entertain guests.

In the scene, Chaplin uses nothing more than a couple of bread rolls and forks to entertain his romantic crush with an impromptu dance routine during a candlelit dinner. The pastry performance goes so well that the Little Tramp’s sweetheart even plants him with a big smooch!

Unfortunately, the end of the scene reveals it all to be a dream. But trust us, the applause you hear when you make your own buns boogie at the dinner table (phrasing!) will be all too real.

Keep Pets Away from the Table…Especially Leopards

We love our pets. We know you do, too. But sometimes it’s simply best to keep Snoopy and Garfield away from the dining area, especially for meals with special guests.

In Howard Hawks’ beloved screwball comedy Bringing Up Baby, this lesson can be seen firsthand when paleontologist David Huxley (Cary Grant) and heiress Susan Vance (Katharine Hepburn) misplace a pet leopard named Baby before sitting down for an evening meal with Susan’s aunt.

As you can see in the clip below, having leopards on the loose during your Thanksgiving feast will likely stir up a lot of confusion…and plenty of animal calls.

Clear Your Sinuses Before Dinner

Allergies suck. But that’s no excuse to disrupt the rest of your family’s Thanksgiving by coughing, sneezing and…well, imitating whatever Jack Lemmon is doing in this scene from The Odd Couple.

This 1968 film, which has since been adapted into several TV sitcoms of the same name, tells the story of Oscar Madison (Walter Matthau) and Felix Ungar (Lemmon), two recently divorced bachelors who decide to move in together — often to disastrous (and hilarious) results.

This scene in particular highlights Felix’s neurotic tendencies, as he attempts to intercept an oncoming sinus attack by groaning loudly right before a meal with Oscar.

Here’s a pro tip: head to the bathroom before your Thanksgiving meal to clear your sinuses. Your in-laws will never confront you about it, no matter how much noise you make in there.

Make Sure Your Bird Doesn’t Bleed

Oh, where to begin with David Lynch’s nightmare-fueled fever dream about the fears of fatherhood? Set in a bleak industrial wasteland, Eraserhead tells the ultra-weird tale of Henry Spencer (Jack Nance), a socially awkward man who must care for his deformed child.

Early in the film, we see Henry visit his girlfriend Mary’s house to have dinner with her and her parents in an incredibly bizarre and surreal encounter involving…little chickens.

At the dinner table, Mary’s father asks Henry to carve one of the miniature chickens, which then starts to gyrate and hemorrhage blood. Things only get worse (and weirder) from there, as Mary’s mother starts moaning oh so uncomfortably every time the roasted chicken’s tiny legs thrust up and down.

Wow. So, what is Lynch trying to tell us here? Hell if we know, but we can say this with the utmost certainty: get a regular-sized bird for Thanksgiving.

On Second Thought, Maybe Don’t Play with Your Food

Close Encounters of the Third Kind (1977)

Okay, so maybe there are some situations in which playing with your food isn’t ideal — like whenever beings from outer space are sending you subliminal messages through mashed potato sculptures.

This is the case for Indiana family man Roy Neary (Richard Dreyfuss), who has a brush with alien life in director Steven Spielberg’s sci-fi classic Close Encounters of the Third Kind.

Shortly after coming into contact with a UFO, Roy becomes fascinated with a mental image of a mountain and begins forming models of the peculiarly shaped mass with everyday objects around the house. During one particularly tense family dinner, Roy forms the mountain out of a plate of mashed potatoes — upsetting his wife and children in the process.

The lesson here? If you must sculpt your mashed potatoes, don’t do it in front of your kids.

Are All the Food Groups Represented?

The Breakfast Club may be the seminal 80s teen movie. No other film from that decade captured the feeling of teenage melancholy and uncertainty quite like John Hughes’ revealing chamber piece.

Additionally, no other scene in film history has better distilled the complications of high school lunch than the one we’ve included here (and yes, we understand that this scene technically doesn’t take place around a dinner table, but it still offers a valuable lesson about meal preparation, so there!).

The five teens serving Saturday detention together all unpack their lunches, each of which reveals something about their respective personalities and home lives. For Brian (Anthony Michael Hall), his parents pack him a lunch that Bender (Judd Nelson) mocks for being “very nutritious.” Jealous, much?

Fortunately, you too can have a “very nutritious” Thanksgiving meal as long as you make sure that, as Bender wisely observes, “all the food groups are represented.”

If you have seen any of National Lampoon’s Vacation movies, you know not to model your behavior after the Griswold family. Which is why we’re using this memorable scene from Christmas Vacation to show you what not to do when preparing your annual turkey feast.

Besides the Griswold clan’s botched blessing before the meal (the Pledge of Allegiance isn’t usually considered a prayer, no matter how patriotic you are), this scene makes our list for the awfully overcooked turkey.

At the point that Clark (Chevy Chase) carves into the turkey, the burnt bird lets out a flatulent sound and collapses to reveal a dried out carcass. Cousin Catherine (Miriam Flynn) tearfully apologizes, claiming that they “put it in too early.”

What a disaster. And no, the fact that Clark could find the turkey’s heart doesn’t make it better!

If All Else Fails, Go to Prison with the Mob

Now, we’re by no means implying that you should literally go to a state penitentiary to improve your Thanksgiving experience. However, should you find yourself in the unfortunate situation of being behind bars, we offer this sage piece of advice: eat with the mobsters.

Goodfellas, Martin Scorsese’s epic crime drama about the rise and fall of real-life mob member Henry Hill, is a masterclass in cinematic storytelling. At the same time, the film offers a valuable crash course in Italian cuisine by way of several memorable dining sequences.

The iconic prison scene, in particular, reveals the surprisingly luxurious lifestyle for wiseguys in the pen, as Hill (Ray Liotta) describes nightly dinner preparations in a cozy voice-over that makes you almost yearn to be alongside the inmates — if only for one delicious meal.

As for your own (Italian-inspired) Thanksgiving, remember: don’t put too many onions in the sauce.

Locate Your Dinner Table Away from Urns

Meeting your in-laws can be truly nerve-wracking, especially at one of the most important family gatherings of the year.

And as Meet the Parents, the Ben Stiller and Robert De Niro-starring comedy, makes clear, a lot can go wrong when visiting your significant other’s folks.

This is evident in the following scene, in which Greg Focker (Stiller) repeatedly puts his foot in his mouth with an obviously fabricated anecdote about milking a pet cat.

However, bad conversation isn’t Greg’s only social blunder here. Sure enough, the evening soon devolves into complete chaos when Greg opens a bottle of champagne, the cork ricocheting off a nearby urn containing the remains of his father-in-law’s mother.

From there it only gets worse, as the family cat mistakes the newly formed pile of ashes on the floor for a makeshift litter box.

You know how all this could have been avoided? Moving the meal away from precariously perched urns. Take note.

Along the way, Ofelia encounters a number of strange creatures in a magical labyrinth that serve as real-life parallels for her war-torn childhood. Perhaps no creature is stranger, though, than the Pale Man, a fleshy child-eating monster that stores its eyeballs in its claw-like hands.

In any case, the following scene makes our list because it technically qualifies as a (very brief) dinner scene. In it, the Pale Man (played with terrifying believability by body actor Doug Jones) is fast asleep in front of a table piled high with delectable treats.

Unfortunately, the Pale Man has a thing for grapes, which is bad news for Ofelia, who unwittingly consumes two. This simple act awakens the Pale Man from his slumber, who lunges after Ofelia before she makes her narrow escape.

Now, we’re not saying you can’t serve grapes at your Thanksgiving dinner. Of course you can! All we’re saying is that it might be wise to stick to traditional cranberries in case a few missing grapes rubs your relatives the wrong way.

— Happy Thanksgiving from your friends at Applied Art!