Celebrating 25 Years: Six Films from 1993 You Need to See Again 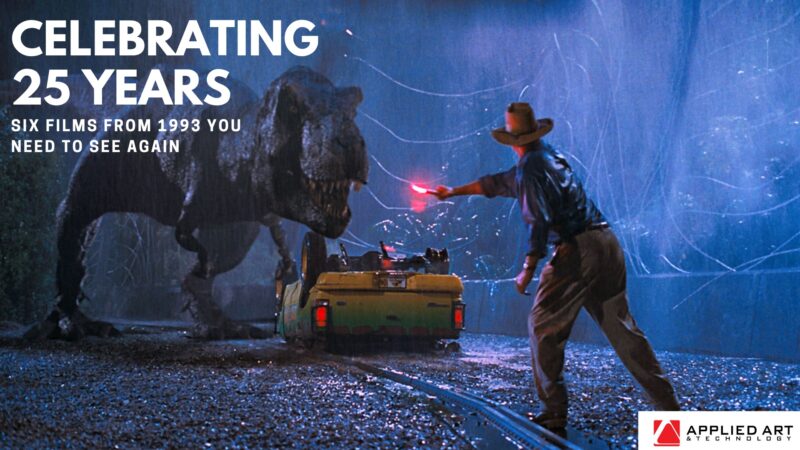 To help ring in our silver anniversary, we’re taking a look at some of our favorite movies from the year we were founded: 1993.

Just like the founders of Applied Art & Technology, the following films have aged gracefully over time (no, I was not paid to write that), and their narrative impact and filmmaking expertise can still be felt a quarter-century later.

From dinosaurs to botched drug deals to...groundhogs, these six films will have you wishing it was 1993 all over again. (That husky-voiced 90s movie trailer guy? Not so much).

Bolstered by a vibrant and vicious screenplay penned by a pre-Pulp Fiction Quentin Tarantino, director Tony Scott’s ultra-violent ode to love on the run is the guilty pleasure movie of 1993.

After a deadly confrontation with Alabama’s pimp Drexl (an almost unrecognizable Gary Oldman) and a mix-up with a drug-filled suitcase, the two lovers are forced to leave town to outrun the law and the lawbreakers.

The all-star cast also lends a hand in establishing the film’s undeniable charm with fittingly offbeat performances. Along with Slater, Arquette and Oldman, True Romance features a who’s who of top actors from the decade, including: Dennis Hopper, Christopher Walken, Brad Pitt, Val Kilmer, Samuel L. Jackson and a pre-Tony Soprano James Gandolfini.

5. The Age of Innocence

One doesn’t usually associate costume dramas with Martin Scorsese, the legendary director of such dark and gritty films as Taxi Driver and Goodfellas.

And yet, he made one of the very best the genre has ever seen with The Age of Innocence, an unlikely period adaptation of the 1920 novel of the same name.

Standing in stark contrast to the crime-oriented stories that populate much of Scorsese’s filmography, The Age of Innocence remains an unexpected artistic triumph for the director.

Scorsese directs with a delicate hand, gifting his drama with exquisitely detailed set design, natural lighting and stately compositions. All the while, the veteran filmmaker avoids the stuffiness of other period pieces, drawing three incredibly raw performances from his lead actors that uncover their innermost, unrestrained emotions.

In this way, Scorsese pulls back the curtain on this highly romanticized era — revealing it to be an era in which, ironically enough, hardly anyone was innocent when it came to love.

In a career filled with countless iconic blockbusters, Steven Spielberg’s greatest piece of escapist filmmaking may still be the original Jurassic Park.

The film follows a small group of visitors inside the titular park, located on an island where scientists have successfully cloned dinosaurs to roam free. However, things take a turn for the worse when a failure in the park’s power facilities places the group face to, well, genetically-engineered face with the prehistoric predators.

Jurassic Park took the world by storm upon its initial release, and that’s putting it mildly. The film set box office records as 1993’s highest-grossing film, establishing a long-running franchise and ushering in a new era of special effects work along the way.

Thanks to some of the decade’s most groundbreaking computer-generated imagery and life-sized animatronics, the dinosaurs in Jurassic Park remain just as convincing — and terrifying — as they were when they first burst onto the silver screen 25 years ago.

But more than special effects or box office receipts, Jurassic Park has endured all these years because of its boundless creativity. Few films before or since have so perfectly captured the imagination of a generation of filmgoers, breathing new life into a medium that simply refuses to go extinct.

Imagine you were forced to live out the events of the same day over and over until the end of time. Sounds like a pretty horrible dream, no?

In the film, Connors (Bill Murray) is sent on assignment with his news producer Rita Hanson (Andie MacDowell) to cover the annual Groundhog Day event in cozy Punxsutawney, Pennsylvania. Connors makes no effort to hide his disdain for the assignment, but an unexpected blizzard strands him in the small town — and, as it turns out, in a time loop repeating the same day over and over again.

With an extremely clever premise at its core and a pitch-perfect screenplay balancing laughs with pathos, Groundhog Day has rightfully been hailed as one of the best comedy films of the 1990s.

Beyond being a star vehicle for Murray (who was never more sweetly cynical than in this film), Groundhog Day transcends comedic tropes by posing thought-provoking questions about the human experience, happiness and time itself.

It’s an endlessly rewarding film, to be sure, and one that many movie fans don’t mind experiencing again and again...and again.

When international filmmaker Krzysztof Kieslowski set out to make a film trilogy themed on the ideals of the French Revolution, it’s unlikely anyone (besides, perhaps, Kieslowski himself) knew just how powerfully these films would connect with a global audience.

Three Colors: Blue, the first installment in the trilogy, revolves around the first Revolutionary ideal of liberty — or, more specifically, emotional liberty.

Opening on a fatal car crash, the film follows Julie (Juliette Binoche), a Parisian woman who survives the accident but whose husband and child are killed. Faced with unimaginable grief, Julie attempts to isolate herself from others, only to eventually uncover hidden truths about her deceased husband.

Concerned more with interior turmoil than with external narrative forces, Kieslowski crafts a film that relies heavily on stylistic choices to reveal emotion. He does this by carefully controlling light and color to emphasize certain characters — and even objects — within a given scene.

Unsurprisingly, the film’s titular color is prevalent throughout, with blue appearing in everything from a piece of tin foil blowing in the wind to a swimming pool into which Julie submerges herself.

And of course, Binoche deserves particular praise for her captivating portrayal as the grieving widow, whose complex emotional response to the tragedy remains just as impenetrable as it is immediately familiar.

That film is Schindler’s List, and it helped shine a much-needed spotlight on one of the darkest and most heinous chapters in human history.

Set during World War II, Schindler’s List tells the unbelievably true story of Oskar Schindler (Liam Neeson), a Nazi Party member who attempted to save thousands of Jews from the Holocaust by employing them in his factories.

Having grown up in an Orthodox Jewish household, Spielberg fully grasped the film’s great emotional and spiritual weight. In fact, the acclaimed director was reportedly reluctant at first to make the film due to its solemn subject matter.

That solemnity is ever-present throughout Schindler’s List, which oftentimes looks and feels like a historical newsreel punctuated with moments of dramatization, as opposed to a full-blown Hollywood production.

Employing elements of documentary expression, striking black-and-white cinematography and harrowing recreations of Holocaust-era horror, Schindler’s List is by no means a traditionally enjoyable filmgoing experience. But it’s a necessary one.

Serving as both a tribute to the Jewish people and a powerful condemnation of anti-semitism, Schindler’s List reminds us that no matter where evil may strike, the human spirit will always endure in the end.