“It's up to me to make that finished piece, what's coming out of the camera, look good.” - Eric Sahrmann 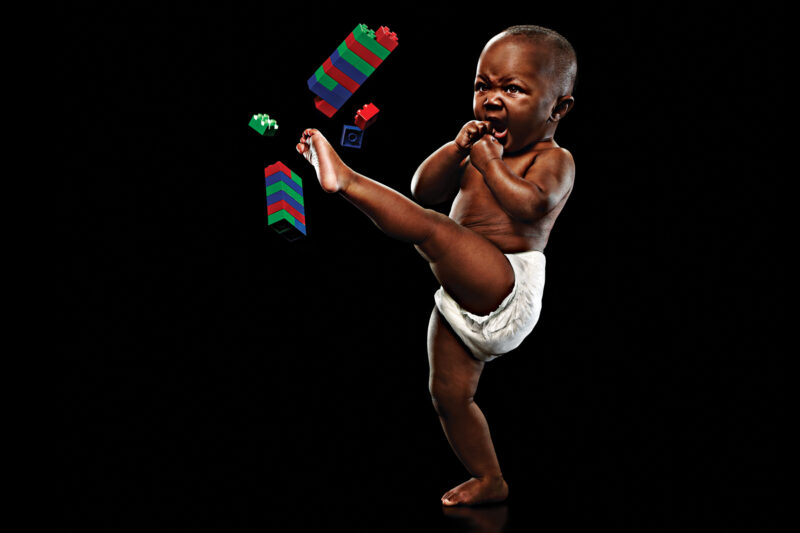 What is the most interesting project you’ve done? One that stands out. Good or bad.

One that stands out is the one I won a CLIO Award for, the "Strong Babies" campaign. The client came to us and wanted us to create CG babies. We had brainstorming sessions and came to the conclusion that instead of CG, photography and retouching would be the way to do it because skin is a very hard thing to do in CG.

I think it was a two-week long shoot from casting to shooting. We cast ten babies per shot. The casting sessions were insane with all these moms and their babies. I was shooting on a small set to make sure the babies wouldn't be distracted. I had the compositor right there working with me. I'd capture something in camera and he'd start placing it. We slowly started building these babies and by the end of the shoot, we had three pieces made out of, probably, thirty babies.

That campaign won a CLIO that year. The media picked it up, I think it was one of those sites like a Buzzfeed. I talked with Good Morning Americal, Huffington Post and other news outlets. There was an agent out of LA who wanted me to do a whole TV show, a reality show about how I shoot babies. It ended up being just really strange.

How important is originality in advertising and marketing?

And you need to know your craft. Doing things you have never done before is what being creative is all about. If you shoot the same way for two years in a row, you're behind the curve already. There's nothing worse than shooting something that looks like you did it five years ago.

What are some of the big name agencies you’ve worked with?

In Chicago, I’ve done a lot of work with Leo Burnett, BBDO, FCB and several others. Those are the large agencies that have many levels of creative. There were some small agencies that we worked with that were great as well. They had these really creative people that would let you be creative on your own.

What would you say is the biggest thing you learned from working with large agencies on some of these big accounts?

How would you answer when people say, "I don't want to spend any money. I can do this with my iPhone. Why should I spend a lot of money for a professional to do this work for me?"

The professional must be successful every time. There are some beautiful things that were shot single camera. But in order to meet the client's expectations, there's a team of people behind the camera. It's that production value that goes into something to make it look high budget even though you may not have a high budget. You need a guy doing sound who knows what he's doing. You need the set to feel right. You need the location to feel right in order to get the best performance. Anybody can go out with a camera or a phone and shoot an interview, but to have the right look, to convey the right message. You need that experience.

Why did you come to Des Moines?

I spent 20 years in Chicago, it was a long time. We decided to come to Des Moines after we had our first child. For us, Chicago wasn't necessarily the place we wanted to be raising a kid. We have family connections here in Des Moines so the next big question was, "What do we for work if we’re moving?" I had always been familiar with Applied Art, and they were definitely doing stuff that I wanted to do. It felt like that was a place that I would fit nicely. I came and talked with the guys and made it work.

What's your creative approach? A lot of people think this is magic, some fairy dust, and there's this great idea.

If I'm hearing a concept or a pitch, the first thought that comes into my head about what it looks like is usually the right thought. That often means researching it and building on it and figuring out how to make that first thought better. Let the creativity kind of blossom from that.

What's the most challenging part about the creative process?

Probably dealing with restrictions. For instance, maybe a drone shot would make the campaign look so much nicer, but you can't do it because you're close to an airport. I think that's one of the things that you always have to be prepared for. Good creative is hard work.

What would you tell clients about how to get better creative product when working with you?

I think they have to ultimately trust you.

There’s an interesting story that you may or may not have heard before. There was some big advertising convention and they invited Tony Kaye, who is a world famous director to give the keynote speech. They flew him 10,000 miles to give the speech. He walked up on the stage and leaned over the microphone and just said one word, "Trust" and then walked off.

It's brilliant because it left you focused on the message and he hit the mark. That trust is so important.

Yeah. Definitely.... Trust, to know he has your back. He knows what he's doing. It's going to look good. Just trust me.

What's your obligation to the client?

The obligation to the client is to follow through on that trust. You need to put all of your effort, no matter what your restrictions may be, into giving them the best final product.

Tell me about becoming a creative director?

I was creative director on a lot of shoots for Bose. You get a chance to chase what's in your mind's eye. Foster that and make sure that eventually comes through. It's more responsibility, but it's more freedom in a way.

Give me a definition. What's a creative director?

It's almost like being a creative sponge, to hear everything and absorb it all, and then put everything together to make it work. The most important thing is to really listen to what other people say, but not be afraid to stand up and fight for better work if necessary.

As you started working directly with marketing departments. How was that different than the agencies?

They are looking to you to help create their campaign. For instance, Bose needed in store signage for something. "Well we have these headphones. We don't know what to do." We'll figure out a way to create this campaign for you. We can do this in-store signage. We'll also figure out lifestyle images that can go in magazines, and online.

Tell me a little bit about your background.

I went to school for photojournalism, at the University of Kansas and was the head of photojournalism for the newspaper for four years. We covered news, sports, which was a big thing in Kansas, especially the basketball team.

I graduated with a degree in photojournalism and I did four or five unpaid internships at different newspapers. It was great experience, but career-wise, I couldn’t get by making very little money while being on call 24/7. I happened to overhear a conversation about this guy who was a commercial photographer in Kansas City who was offering internships. His name was Nick Vedros. He was a very successful commercial photographer. He let me come on board and he got me into the commercial world of photography and how exciting it could be.

In photojournalism we never dealt with the studio and the lighting, once I worked with Nick and saw what he could do with lighting and what he could do working with a model and some of the stuff he'd come up with, it really got me hooked. He helped me figure out what I wanted to do. He had some connections in Chicago and gave me a list of people to call once I got there. I was new to the city and I was twenty-one and just started cold calling people and assisted for two or three years around town.

I freelanced a lot for a place called Alter Image. They were doing some exciting stuff that was a step above everyone else. A lot of compositing, which now is second hand, of course you composite a photo into a background, but back then it wasn't that common. I shot there for a long time and then we started incorporating CG into our work. CG and photography go hand in hand really, so basically shooting a person in a studio and then putting them in this crazy background that was all CGl. I did that for probably, fifteen years.

Eventually, I transitioned over to video and visual effects and CG work. I spent four years as director of photography at Alter. That involved video and still shooting and then combining that with visual effects into a project.

What was making a transition into media like coming from the still background?

It's interesting because the photo and video world started melding together after the Canon 5D came out. That kind of opened up everybody's eyes. So the clients were like, "Let's do some video," A lot of the campaigns were photo and video together because they wanted that cohesive look between the two. The transition was pretty easy because it's a lot of the same techniques as far as lighting, as far as interacting with your model/actor, it all goes hand in hand.

Do you have mentor?

My father had camera equipment when I was growing up. That's where I originally picked up these old film cameras with these big lenses and that's kind of where I fell in love with it. And Nick Vedros, because he was able to show me that I could do this for a living.

What would you do if you could do something else?

I'd be a meteorologist, I think. Which is great thing being in Iowa, because you can see more of the sky. You can see storms move in. Something fascinates me about storms and clouds.

Is that because photographers are so much at the mercy of the weather?

Could be! I've looked at a lot of radars in my life! I think watching a storm move in and that peaceful five minutes before it starts raining is probably the best nature feeling that anybody can get.

What are your words to live by?

I never thought of that one before. Words to live by. I guess I would say my first thought that comes to mind is keep learning. I never want to just be comfortable. It's easier now more than ever to just keep learning. You don't have to necessarily sit in a classroom or go to a college to learn something.

What can Iowa do to attract more people like you?

When people talk about Iowa, you hear farms. You listen to podcasts or TV shows and a lot of times Iowa is the butt of a joke. But really, the creativity here is on par with any place that I've been. I did a lot of shooting in New York and LA. It helped me realize creativity is creativity no matter where you live. To me, Des Moines is like the quiet kid in class who blows everyone away when he finally gets a chance to talk. So I guess to attract people, maybe we need to make a little more noise. Change the stereotype. This is a great town, and the people that live here know it. We just need to keep pushing and make sure that the work we create is just as impressive as the work being produced anywhere else.