VR, AR or MR...What’s the Difference & Why Should I Care? 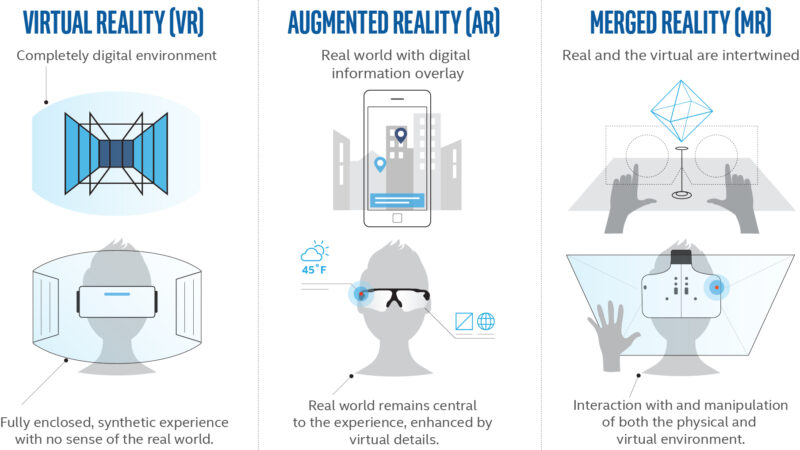 If you’re up to speed on VR (Virtual Reality), then you’ve probably heard about AR (Augmented Reality), and if you’re really on the bleeding edge you may even know of MR (Merged Reality). All of this technology is incredibly popular right now. Marketers are scrambling to get on board as the online platforms quickly develop new capabilities.

Our team has literally written the book on VR and AR marketing. Download our free e-book here to learn more about how you can use this new technology.

VR: Virtual Reality is a step beyond the traditional rectangular screen. VR is a 360-degree experience. Imagine the video as a sphere. The viewer can immerse him or herself into the environment from the middle of this "video sphere". The video content can be a real world environment recorded using multiple cameras, or a digital environment created by using CGI. A viewer can look all around the digital environment, essentially creating their own unique viewing experience. You can view these videos on Youtube and Facebook feeds from a smartphone or computer, or you can use a headset to fully immerse yourself into the video. A great example of immersive VR footage is a skydiving video we made with Skydive Iowa. The user is given a first person perspective as they jump out of a plane and parachute to their landing. Common headsets for this are the Oculus Rift, Samsung VR and HTC Vive. Cameras that are currently available that capture high quality 360 VR footage are the GoPro Omni and Nokia Ozo.

AR: Augmented Reality introduces the real world into the equation. Instead of the viewer being in an entirely “virtual," pre-recorded world, they can see the real world around them with “augmented” elements. This has been humorously referred to as "Terminator" vision. Digital graphics are placed over real-world items to provide helpful information or entertaining elements. Imagine the experience of walking through a museum and being able to see digital “info pop-ups” over items of interest. Currently the most popular tech offering this is the Microsoft HoloLens.

MR: Merged Reality is the holy grail. Essentially, the viewer can use their hands to manipulate things both in the real and virtual world. They are not entirely blinded from the real world as with VR, and they can interact with the world more than with AR. There are a few options available for hand tracking, including the Oculus Touch and Leap Motion, but the most notable proponent of MR is the Intel Project Alloy.

If you want to learn more about VR and AR marketing, fill out the form below to download our free VR & AR Marketing eBook.