Breaking through the Noise with Silence 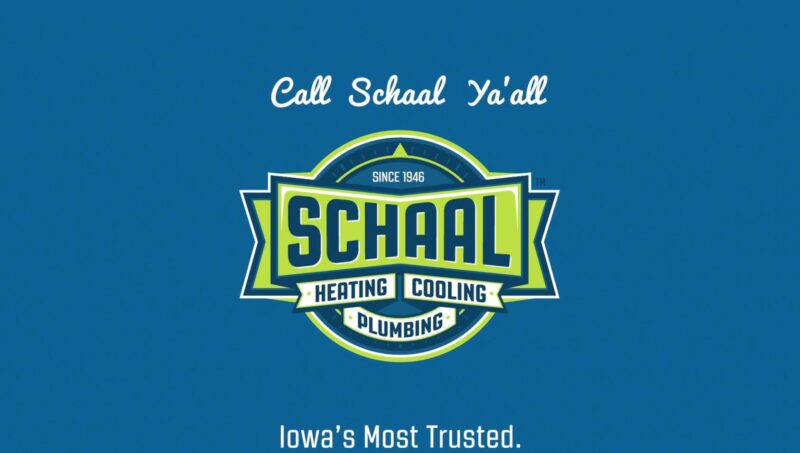 Schaal Plumbing, Heating and Cooling is one of the most successful — and trusted — HVAC companies in Central Iowa. With over 70 years of experience, the company has earned a reputation for honesty, reliability and expertise. Their incredibly catchy jingle "Call Schaal Ya'all" serves as a company calling card that is both immediately recognizable and reassuring.

Still, with all their success, Schaal was faced with a common marketing dilemma: how do I differentiate myself from my competition?

In partnership with Next Step Advertising, the Applied Art team responded to this challenge by developing a concept that could help Schaal stand out and grab attention — with an unexpectedly understated twist.

First, we conducted market research to get a better sense of the branding behind Schaal's major competitors. That research informed us that we could help Schaal differentiate themselves by embracing an understated aesthetic that emphasized proactive solutions.

So, instead of outlining a "disastrous problem," or hitting viewers over the head with rebates, we drafted a quiet and intentional concept that demanded attention by daring to fly under the radar.

The concept consisted of four scenarios, each depicting regular people in mundane activities, enjoying their home free of conflict. After a few beats, text graphics would appear on screen to describe the stress-free situation being presented, before revealing how it happened: "they called Schaal."

From a technical standpoint, each spot consisted of just one primary shot, with minimal camera movement. There was no traditional music track, with the only audio featuring soft, ambient noise in the home, such as running water or chirping birds. Our goal was to catch viewers off guard, with the silence of our spot standing out among the louder commercials it would likely be sandwiched in between.

We wanted Schaal to receive plenty of mileage from these spots, which is why we chose to shoot four distinct scenarios, each running 15 seconds. We also designed each scenario to focus on one of Schaal's key value propositions (Heating, Cooling, Plumbing, Maintenance), so that their audience could get a full picture of the company's services.

And lastly, no, we did not leave out the jingle! To maintain our understated, silent aesthetic, we replaced the jingle's vocal delivery with a soothing xylophone instrumental, which plays at the end of each spot. (Fun fact: that instrumental was recorded in our studios on a real xylophone!).

According to Jonathan Marchand, Director of Sales and Marketing at Schaal, our spots were successful in helping build top-of-mind awareness for the company.

"We did get quite a bit of positive feedback," Marchand said. "I think the timing of it was perfect with the pandemic, as more people wanted a sense of 'normalcy.' Overall, we are pleased with the spots."

See below for a sampling of our "silent" Schaal spots: