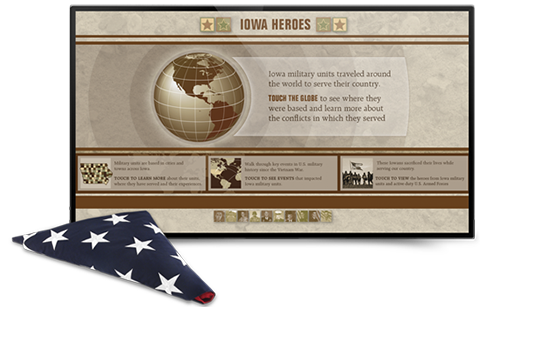 Applied Art produced this touchscreen interactive for the Current Conflicts exhibit at the Sullivan Brothers Iowa Veterans Museum. The museum – a 15,000-sq.-ft. facility in Waterloo, Iowa – honors the service and sacrifice of all Iowa veterans from the Civil War to the present.

Before the museum’s grand opening in 2008, Applied Art’s team worked closely with museum staff and Split Rock Studios to conceptualize and produce the 27 audio-visual and interactive exhibits featured in the museum.

In the years since the Vietnam War, Iowa’s military reserves and National Guard personnel continue to be called up to active service for our country. These deployments pull military units from across the state and deploy them to locations around the world.

The Current Conflicts interactive offers museum visitors the opportunity to discover the countries and conflicts where Iowans served, appreciate their impact and experiences, and honor Iowa’s Fallen Heroes.

As Iowa’s Reserve and National Guard units continue to actively serve, the interactive provides museum staff with the ability to add locations, stories, and details.

In addition to developing the touchscreen interactive for the exhibit, Applied Art's responsibilities included providing the cabinetry based on the museum’s design standards. We were also responsible for specifying, procuring and installing the electronic components for the exhibit including museum control system integration.

As with most projects for non-profits, the first phase the Current Conflicts exhibit was fundraising. Museum staff approached Applied Art with their initial thinking on the content, messaging, and functionality for the Current Conflicts addition. A location within the museum was earmarked and a rough configuration for electronics and cabinetry was determined. Based on this information, Applied Art provided a project overview along with a preliminary budget for use in fundraising.

When funding became available, the museum team and Applied Art went to work developing a Plan Document that – following a series of discussions, reviews and updates – became our guidebook for the project. The document detailed the cabinetry designs, electronics, user interface, content management system, schedule, scope and budget. Throughout the development process, the Plan Doc was updated to integrate project progress.

While Applied Art designed and developed the application, database and CMS, the museum staff researched and gathered data and assets on Iowa military units, deployments, and Fallen Heroes. The two teams collaboratively developed a data coding system to tag and link up this core data with Content Items – the images, copy and videos that would be available within the application to tell each story.

Applied Art integrated content into the interactive as it was submitted by the museum team, allowing the museum team to continue its focus on research and preparing content. When the interactive launched, it featured over 1,100 Content Items that assemble to tell the stories of 200 Iowa units and almost 100 Fallen Heroes. Since launch, the museum team continues to expand the content using the application’s browser-based CMS.

This exhibit is especially moving for those visitors who served in these conflicts or had family members who served. Visitors can quickly locate any Iowa unit based on its home location, then learn about the unit’s service and experiences. Families can submit images and information on their Fallen Hero to honor and tell the hero’s story. Videos and images tell about the countries and conflicts where Iowans served to aid in understanding the reach and impact of Iowans’ service around the world.

Testimonials:
“This is cool. I saw guys I served with in Iraq. Nice way to preserve our deployment.”
–Member 1st Battalion, 133rd Infantry who deployed in 2005-06

“The Fallen Heroes section is a moving tribute.”
– Visitor comment