Insights from the Ooma Booth

This January, Applied Art’s own Rick Vanderleest travelled to Las Vegas for CES 2016 (The International Consumer Electronics Show) where he set up and supported the software for Ooma Inc.’s booth. After the show we chatted with Rick and Alex (lead developers) on what went into making this a rousing success.

1. What were the client’s expectations/inspirations, and how did you go about meeting these expectations?

Alex: The clients were looking for something engaging that could interact in real-time with the technology we created on the show floor.

2. What kind of technology went into creating this booth?

Alex: For the hardware at show, we created an animation to work with their Ooma software and signal different physical devices, all in real-time right there at the booth. We built the app with the software HTML5 and AngularJS. 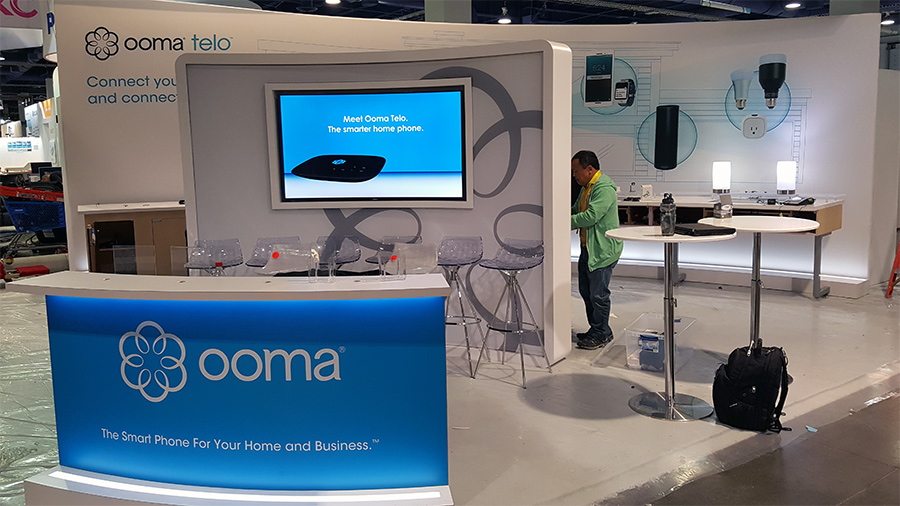 3. What was the biggest challenge [in development & at booth] and how did you go about solving it?

Alex: On the development side, the greatest challenge was just trying to keep the design very clean, not having the screen too overwhelming, so that the main focus was on their technology, not the animation.

Rick: Any issues I encountered were surrounding the crowded Trade Show environment and getting all the different devices to work, and work well, with the wifi.

4. Tell us a little more about the booths and what was their draw for customers?

Rick: There were three different Ooma venues that we had to physically get set up. Luckily, all of the venues ran the same software. The first booth was in the South Hall, the second at Sands Expo, and the third was for a one night only, at the Mirage Hotel (Pepcom Digital).

The South hall booth was setup to have four different stations where visitors were able to access any program from any station. The first station had an Apple Watch and iPhone. The second had two Phillips light bulbs that would turn on and off based on how you controlled them. The third station really highlighted their integration with Amazon Echo, and at the fourth station, Ooma was to spotlight their integration with the Nest Thermostat.

At the Mirage for Pepcom Digital we had one touchscreen setup. Lastly, The Sands Expo booth had two stations set up. One was the Apple Watch and iPhone, the second was the two Philips light bulbs that would sync with the software and flash on and off with interaction from customers.

5. Was the show successful? Anything you would do differently?

Rick: The show was very successful. Our client was interested in seeing how to expand the work we did for them in the future and also the possibility of using some of our work on their website.

Alex: The timeline we had to create the animations was condensed. The animations were completed and delivered to Rick at CES and installed onsite instead of having them in Iowa to test beforehand. In the end, everything worked great and came together at the show. If the client is happy, then it was successful.